The History of the Indianapolis Athletic Club

The Indianapolis Athletic Club (IAC) was founded as an organization in 1920. Located at 350 N. Meridian St. just 3 blocks north of Monument Circle, laid the corner stone of their new building in May 1922 and opened in 1924, a time when Indianapolis saw a large number of new high-rise structures replacing the old mansions close to the heart of the city.

The Indianapolis Athletic Club grew in prominence throughout the years, with many mayors, governors, state legislators, business leaders and future athletes at the college, professional and Olympic levels. Membership grew to over 2000 members. Traditionally a Democratic organization, when new the Indianapolis Athletic Club featured three floors with 160 sleeping rooms for members, an apartment for women, a swimming pool, billiard and smoking lounges, and dining rooms. Architect Robert Daggett modeled the bronze doorway and carved limestone surround after the Venice Palace in Rome. The Frank McHale Room and the Robert V. Welch Lounge were two of its member bar and dining areas and the Frank McKinney Pool as well as the basketball gymnasium were used daily.

Swimming and athletics obviously played a large role in the club’s programming and IAC members participated in many Olympic games. Classes included diving, water ballet, and life saving. In addition, for over thirty years the Downtown Indianapolis Rotary Club offices were located in the IAC.

Tragically, on February 5, 1992 a fire caused by faulty refrigerator wiring killed one overnight guest and two fireman. As a tribute, every year during the St. Patrick’s Day parade a battalion of city fireman pause in front of the building, turn in formation, and salute before continuing. 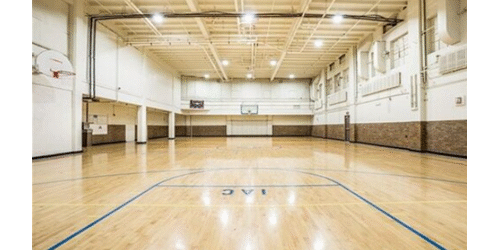 ATHLETIC WAS OUR MIDDLE NAME

Apart from the comradery of socializing at Indianapolis Athletic Club events, many members and their families enjoyed the sports leagues, including basketball, bowling, swimming, squash and racquet ball. 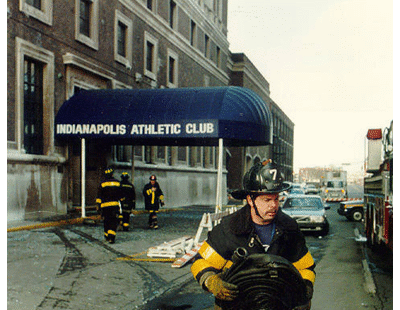 Tragically, on February 5, 1992 a fire caused by faulty refrigerator wiring killed one overnight guest and two firemen. As a tribute, every year during the St. Patrick’s Day parade a battalion of city firemen pause in front of the building, turn in formation, and salute before continuing.

Every year since the fire, the Indianapolis Fire Department and the IFD Emerald Society, has been very involved in the St. Patrick’s Day Celebrations and has held a memorial for their fallen brothers Cpl. Ellwood M. "Woody" Gelenius, who was 47 at the time of the fire, and Pvt. John J. Lorenzano, who was 29.

The Athletic Club Foundation partners with the Indianapolis Firefighter’s Emerald Society to host the tent party during the Hoosier Lottery St. Patrick’s Day Parade as well as after the Shamrock Run Walk which finishes at the IFD Union Hall on Mass Ave in Indianapolis.